An interesting phenomenon is making itself evident in our modern society. Mother and daughter duos are attending tattoo parlors together. The mother is not there as a chaperone but as a participating client. It is a new form of bonding for mom and her gal. Often the two decide ahead of time that they will get the same tattoo and in the same place on their bodies. Once they get to the tattoo parlor they can spend time together poring over pictures and templates, finally coming to agreement on style, color and size. 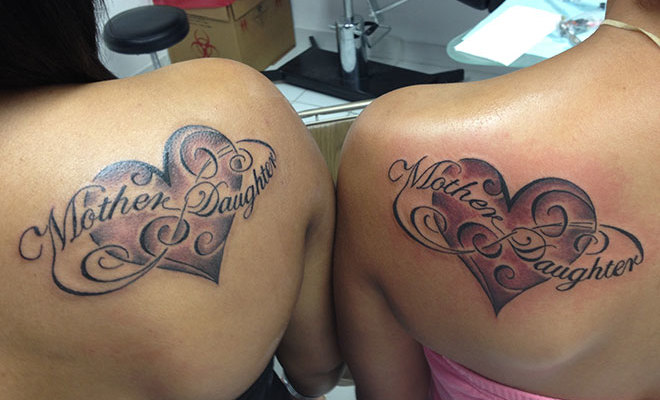 On the internet one can read a number of mother-daughter tattoo stories. In one such story, a young woman asked her mother if she could have a tattoo. The woman was surprised enough when her mom said that it would be okay but she was totally shocked when her mother said that her agreement was conditional. She wanted one, too and she wanted them to get the tattoos together.

Mother-daughter bonding rituals are nothing new. Moms teaching their daughters to cook and sew is more than a practical lesson for the daughter’s future. It is a way of coming together for a time to talk and laugh. The daughter gains respect for the mother in acknowledging that Mom has wisdom to share. As the young lady grows into womanhood she will value her mother’s input. 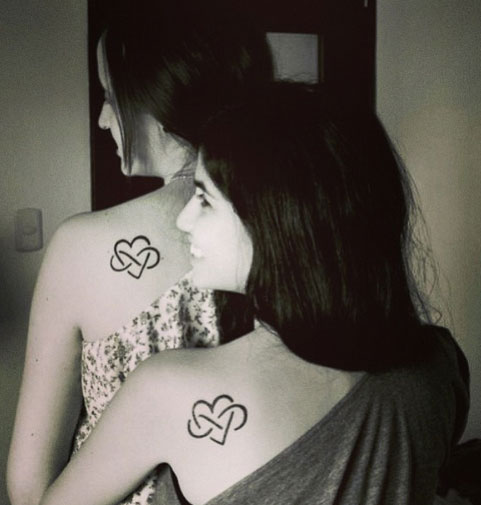 Shopping is another bonding activity. There are decisions to make together with lots of fun dialogue. It is a time to show mutual respect for each others’ individual tastes. Shopping usually leads to lunch, which is another bonding experience. This leads to more chatting, laughing and perhaps a few secrets will be exchanged in confidence.

What is it about being tattooed together, though, that seems so much more primordial? There seems to be a spiritual connection more strongly implied in the getting of tattoos. Tattoos by their nature are symbolic. They are freeze-framed images of our innermost feelings and strongest beliefs. By getting these images indelibly ingrained in our skin we are inviting others to get a glimpse of the working of our minds and hearts. To share this experience with another person is a powerful expression of trust. In choosing the same patterns and having them applied to the same parts of the body is to say, “we share certain feelings and beliefs.” To share feelings and beliefs is the deepest bond to which humans can aspire. To express that bond through a permanent marking of the body is a strong exhibition of faith and hope in the longevity of the relationship.

Then again, perhaps it is simply FUN! What other activity can a mom and daughter enjoy together that makes the mom feel younger and the daughter feel more mature? Often women with teenage daughters are at an age that they remember once considering “old.” Getting tattooed is one way of saying that while she may be getting older, she is still the same fun-loving woman that she has always been. In the same way, the teen daughter can say that while she is still young in years, she has a mind of her own with her own sense of style and taste. In the simplest of terms, this is what fashion is; an opportunity to show one’s individuality.

You may be surprised to learn that Winston Churchill’s mother, Lady Randolph Churchill, had a tattoo. It was considered fashionable in her time for a woman of means to have a tattoo. She had a snake tattooed around her wrist. The practice of tattooing has a long history. In 1992, the 4000-year-old tattooed body of a man was discovered in a glacier near the Austrian border. Tattoos have been used throughout history to represent deep spiritual convictions, familial and societal standings and sense of place within the community.

As sailors began to visit Polynesian islands, they discovered that both men and women were tattooed. When they saw the beautiful workmanship on the people there, they wanted tattoos of their own. These 18th century explorers came home adorned with permanent souvenirs of their time spent on the beautiful islands. Eventually, tattoo artists made businesses for themselves in ports and the practice began to spread. Soon soldiers were getting tattoos and by the 19th century it was a fashion statement for those who were rich enough or high enough in society to make such a daring fashion commitment. It was during this period of time that Lady Churchill received her tattoo.

In the United States, tattoos suffered a period of negative reaction and attitude. Tattoos were associated with sailors and other rough characters. For a time tattoos were seen only on sailors, soldiers, bikers or prisoners. However, they have been making a big comeback over the past decade and there has been a virtual explosion in the last few years. Tattoos, which were once considered by the mainstream to be a symbol of rebellion for those on the outer fringe of society, are now being displayed proudly on the bodies of those same mainstream people. Soccer moms are getting tattoos and encouraging their daughters to get them as well.

In fact, in a statement to National Geographic News, Erin Fauble of the Professional Alliance of Tattooists said, “If I had to guess, I would say that maybe 60 percent of the tattoos being done are being done on women.” Until recently that would be unthinkable. “Ten, fifteen years ago, the only time your really saw women in a tattoo shop was when they were on the back of some guy’s bike,” said Zak Huff, artist and owner of Inkspot Tattoos. “Now, most of my clientele are female.”

Perhaps it is the intermingling of fashion with spiritual, outside with inside, or perhaps the who-I-appear-to-be with the who-I-am that makes tattooing so appealing to women. There is no fashion accessory that can make such a statement. The permanence of the mark demands introspection of the woman.

When women learn something about themselves, they instantly yearn to share that information with another person. Women like to be understood and to understand others. That is, perhaps, the answer to the mystery question of why women do everything in pairs. Women enjoy each others’ company. Women bond through the talking that accompanies activity. If the women are daughter and mother, it is a rich and important bond that is made.

There is a sense of identity when mother and daughter choose a common symbol to represent them. Centuries ago, tribal customs dictated identifying tattoos for representation of the various tribes. Like them, we desire to maintain a sense of community and belonging. Having matching tattoos can say that we, in fact, do belong to a community. We belong to a family. Depending on the chosen symbol, the mother and daughter may be saying that together they belong to a way of thinking or to a higher power. 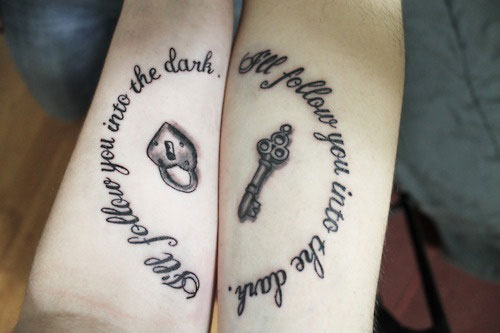 Sometimes it’s simply the shared experience of choosing tattoos and sitting together through the procedure that women love. There is a charming story in East Bay Newspapers Online Edition of a girl who wanted a tattoo, received her parents’ input on size and placement and then asked her mother to go with her for moral support. She chose to have a butterfly about the size of the palm of a hand on her lower back. She requested that the wings of the butterfly be colored like a tiger’s face. She wanted the tiger’s face “to symbolize her strength, courage and fiery personality, even though she may look, from the outside, as timid as a butterfly.” As you might guess, while in the tattoo parlor, this young lady convinced her mother to get a tattoo as well.

There are probably as many reasons for getting a tattoo as there are women who are getting them. Whether it is for a modern day tribal affiliation, a statement of faith, a disclosure of self or just a fun fashion statement, moms and daughters seem to find that it is more meaningful when they share it together.

Scroll back to top